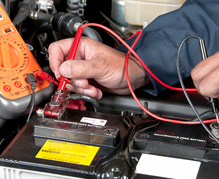 Kellenberger Auto Service strives for total customer satisfaction by staying in contact with the customer throughout the repair process; by giving accurate estimates for price and time, by using quality parts and offering a nationwide warranty; and by employing ASE certified technicians who maintain their skills with ongoing training.

Our technicians are highly skilled and have years of experience. Most of all: they love cars and care about yours. Whether it’s our quality, friendly service or the honesty and integrity we bring to every interaction, our customers love Kellenberger Auto.

Get to know our experienced technicians. They’ve got the tooling, experience, and a desire to help.

Kellenberger Garage was founded in 1939 by Herman Kellenberger. After working for twelve years as a mechanic, Herman decided to take his life savings of $300 and open his own shop. He found a location on North Street that is across the street from the present location. Herman's only helper at that time was his eleven year old son, Bill.

The first month's sales of only $40 was disappointing, but Herman knew that by giving his customers the best service that he could, at fair prices, sales would rise. And they did.

To this day, quality service and fair prices are the reason for the success of Kellenberger Auto Service.
The North Street location soon became too small. Herman took in his brother Nathan as a partner and they bought a larger building on Division St. This location could hold ten cars.

In 1946, Nathan retired and Bill became a quarter partner after graduating from Elgin High School. Business kept growing as the Kellenberger reputation for quality and honesty spread throughout the area.

In 1948, Kellenberger's moved into a building at their present site. In 1956 a 2700 square foot brick building was constructed on the site with heating in the floor and in ground lifts. Bill then became a full partner. Soon after that, Bill's brother Lloyd joined the firm and bought a quarter share of the partnership from Herman. In 1966, Herman sold his remaining shares to Lloyd, and Bill and Lloyd became equal partners.

Kellenberger's also expanded through acquisitions. In 1968 Elgin Auto Radiator was accuired and in 1970, Weigel's Auto Safety Service was purchased and Kellenberger's was into the tire business. In the early 1970's, the Star Service gas station on the corner of North and Center was purchased for parking.

Bill's son, David, started working part time at the shop in 1967 when he was fourteen. He joined the firm full time in 1975 after graduating from Drake University. In 1980, Dave's brother, Jack, joined the company.

In 1991, Lloyd retired and his portion of the business was purchased by Dave and Jack. In 1993 Dave and Jack became equal partners and Bill began his semi-retirement by golfing or alpine skiing depending on the season.

Although Herman passed away in 1985, his spirit lives on in the pride that everyone at Kellenberger's takes in their work. Quality is Kellenberger Auto's biggest asset.